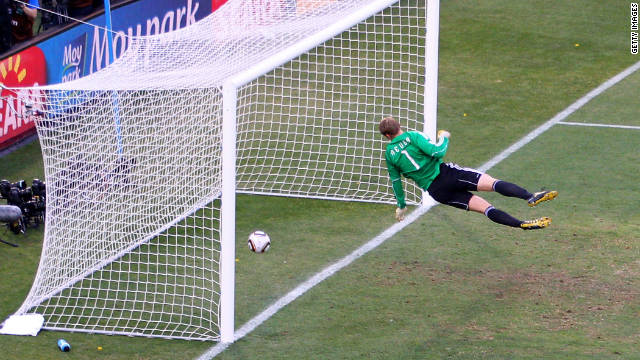 The “goal” that changed everything: England’s Frank Lampard was denied a clear score during a 2010 World Cup match vs. Germany. FIFA has since acknowledged the referee blunder and will introduce computerized help to aid officials at this year’s World Cup. 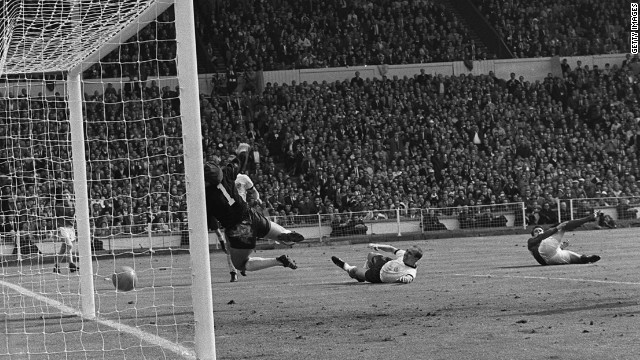 In the 1966 World Cup final, England’s Geoff Hurst scored in extra time, leading his country to the only major trophy in its history. Whether the ball ever actually crossed the line is still up for debate. 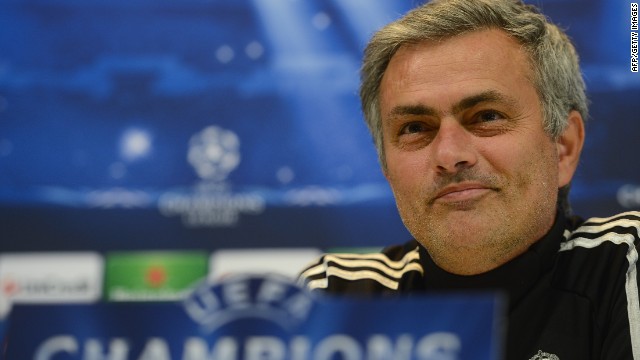 In 2005, Chelsea manager Jose Mourinho coined the term “ghost goal” after his team was ousted from the UEFA Champion’s League semifinal by a controversial Liverpool goal. 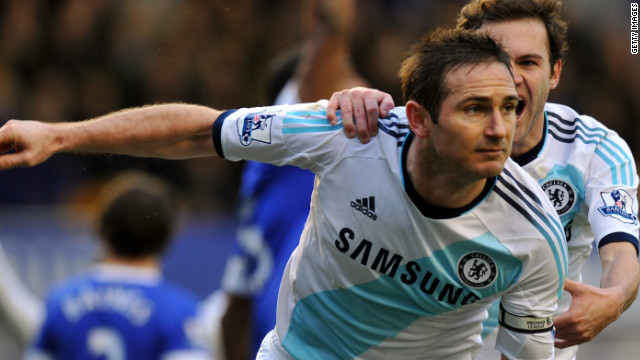 Chelsea’s Frank Lampard was again involved in controversy after he was awarded a goal against Tottenham Hotspur in a 2011 Premier League match. Replays showed Spurs goalkeeper Heurelho Gomes had actually stopped the ball from crossing the line. The Premier League has since adopted goal-line technology. 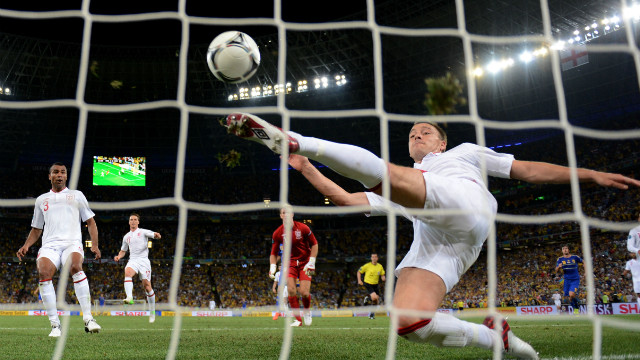 Ukraine was denied a goal in the 2012 European Championships despite the ball appearing to cross the line. English captain John Terry, pictured, cleared the ball quickly from the line and fooled officials. 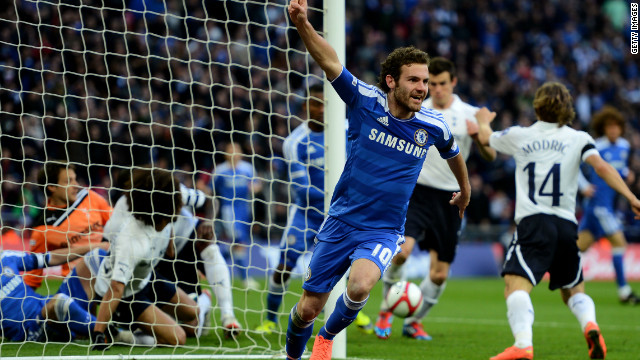 Chelsea versus Tottenham Hotspur again in the Premier League, this time in the semifinal of the 2012 FA Cup. Here, Juan Mata celebrates his goal despite the ball appearing to be blocked short of the line by a Tottenham defender. 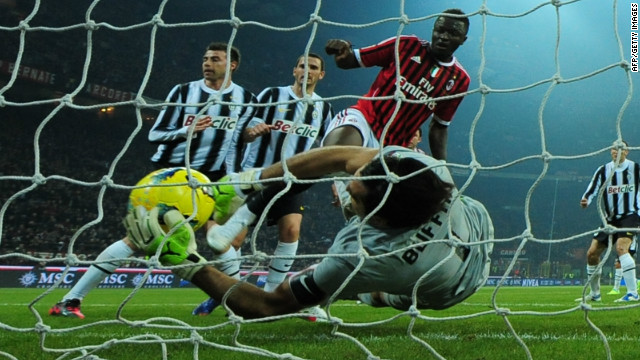 Two seasons ago, in an important match in Italy’s Serie A league, Milan’s Sully Muntari appeared to score against Juventus. However, Juve goalkeeper Gianluigi Buffon pushed the ball out of the net and no goal was awarded. 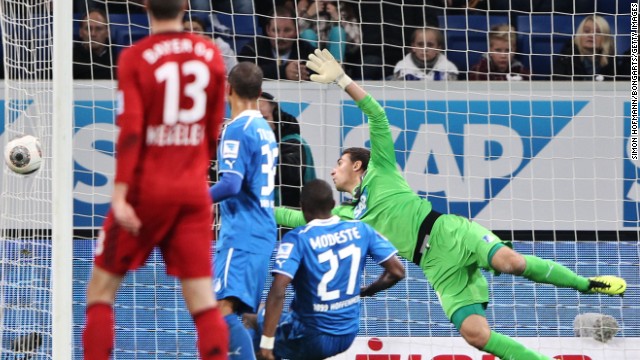 Stefan Kiessling of Bayer Leverkusen was awarded a goal in a 2013 German league game, even though the ball went through the side netting. He eventually apologized to opposing fans. 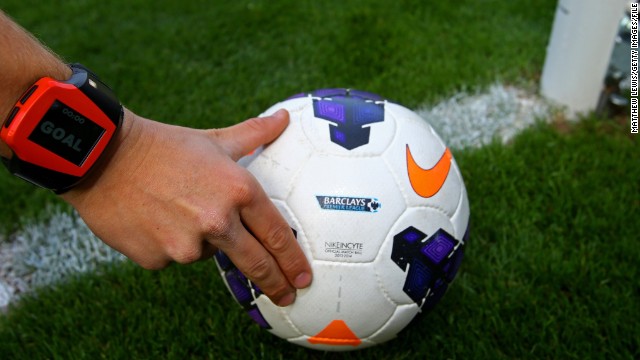 With new “GoalControl” technology, referees will get signals on smartwatches such as this one when cameras detect a ball has crossed the goal line.

(CNN) — In 1966, British soccer legend Geoff Hurst booted a right-foot shot against Germany in the World Cup championship game. The ball struck the top crossbar and rifled down near the goal line before spinning out.

Confusion ensued; it was impossible to tell if the ball had crossed the plane.

Eventually, officials awarded the goal, and England secured its first and only World Cup victory.

Try not to remind German fans.

“They can’t take it away now anyway,” Hurst told Britain’s The Telegraph last year. “It is in the book.”

Can Brazil thrive at the World Cup?

He’s right, but soccer’s governing bodies are doing their best to ensure a similar controversy over a so-called “ghost goal” never happens again.

And as fate would have it, they’re turning to a German company for help.

According to official estimates, FIFA is paying a small German start-up nearly $3.5 million to operate its new goal-line technology in the 2014 World Cup, which kicks off Thursday in Brazil.

The company, called GoalControl, would install 14 cameras in each of the 12 World Cup stadiums that triangulate the motion of the ball with maximum precision: up to 500 images per second.

With that tracking, plus sensors on the goal line, GoalControl can instantly alert a referee when the ball crosses the line. There’s no need to consult a replay booth or another official; the referee in charge merely looks at their smartwatch.

In other words, say “tchau” to ghost goals in Brazil.

“The cameras are connected to a powerful image-processing computer system which tracks the movement of all objects on the pitch and filters out the players, referees and all disturbing objects,” a GoalControl representative said.

If the system registers that the ball has crossed the goal line, it can send a vibration and a visual “GOAL” signal to referees’ watches within a second.

GoalControl says the idea was developed by Dirk Broichhausen, a company founder, after he attended a soccer match in Germany in which there was a dispute over a goal. He began contacting technicians the next day.

For Broichhausen’s fellow Germans, though, the invention came nearly a half-century late.

Sad as whatsapp kicks out many phones before Jan 1

How the Technology of Today has Changed the Face of Sports

For years, FIFA President Sepp Blatter dragged his feet before introducing technology to the soccer field. At various points, he complained it would lead to dramatic increases in play stoppage, or that it limits human officials.

Two things changed his mind: the quick, accurate nature of new systems such as GoalControl, and a high-profile controversy involving two familiar opponents.

In the first half, English midfielder Frank Lampard sent a powerful strike toward the goal, which — of course — hit the top frame, dropped near the goal line, and bounced out.

A goal was not given.

Unlike 1966, however, instant replay revealed the truth: the ball had clearly crossed the line, and England was unjustly denied a goal.

Germany won, 4-1. But for FIFA and its president, it was the ultimate embarrassment. Blatter said Lampard’s ghost goal was the moment he changed his mind.

“For me as FIFA president it became evident the moment what happened in South Africa in 2010,” he said at FIFA headquarters after the incident. “…I have to say ‘thank you Lampard’. I was completely down in South Africa when I saw that it really shocked me, it took me a day to react.”

Still, there are vocal opponents to introducing technology to soccer officiating.

UEFA President Michel Platini is the most prominent. He controls popular European tournaments including the UEFA Champions League.

“I prefer that we have more referees to see if there is a penalty foul and if the ball is going over the line. We don’t need perfect cameras to see the ball,” he said.

Platini also mentioned the high cost, estimating that implementing the technology in the UEFA Champions League could cost €52 million, or nearly $70 million.

“I prefer to give these millions of Euros to grass-roots, to the young players in football, to some infrastructures so they can play football,” he said.

Cost is also a barrier for Major League Soccer. In a statement, league officials said they have not found the right mix of ease, effectiveness and price concerning goal-line technology, although they support its use in theory.

“We have met with multiple goal-line technology system manufacturers and have been carefully monitoring plans to implement the system,” the league said. “As of today, the time required to purchase, receive, install and properly test the equipment precludes MLS from considering the approved system for use, but we will continue to monitor the progress.”

Most professional American sports leagues use technology to aid officials in some form. Most recently, Major League Baseball expanded its instant replay rules this season.

At any rate, one man is overjoyed with the new technological developments: World Cup hero Geoff Hurst.

“If we had this system 50 years ago, it would have shown quite clearly the ball was at least a foot over the line,” he said.

Journalist Accuses NCDC, FG Of Covering Up Covid-19 Death In…

Set Up Panel Of Inquiry Over Delta Killing By Soldier…

Covid-19: The Legal Implications of Social Distancing To Edo…

How oceans can solve our freshwater…