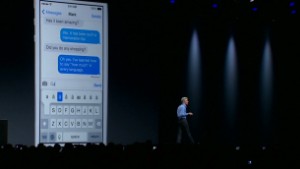 (CNN) — It didn’t get a ton of attention Monday, but Apple’s next mobile operating system means significant changes for how iPhone users send and receive messages.

If you’re an Apple user, this is a big deal. Messages is the most frequently used app in iOS, and is how most users share texts, photos and videos with each other.

With iOS 8, coming this fall, Apple is borrowing features from popular messaging platforms like Snapchat and WhatsApp while unveiling some new tricks of its own.

Here’s a quick look at the new messaging features announced at Apple’s Worldwide Developers Conference. We’ll find out in a few months whether they catch on with users.

The text window in the next version of iMessage will contain a little microphone button. Users hold a finger down on the button, record a short audio or video message, and send it with the swipe of a finger — all without leaving the app.

In this way, Apple is taking a page from WhatsApp, which also allows audio and video messages. Facebook bought that startup, which has a huge user base overseas, in February for $19 billion.

Audio files will appear in your Messages stream as jagged lines. Simply tap on them to listen to the message. Apple did not say Monday whether there will be a limit on the length of the messages.

Photo and video messages that disappear after a few seconds have been popularized by Snapchat, the mobile messaging app that reportedly spurned multibillion takeover offers from Facebook and Google last year.

This ephemeral format has been especially popular with teens and young adults who like to exchange silly or racy messages without fear they’ll be haunted by them later.

Now Apple is getting into the game. Audio and video messages within iOS 8 will automatically vanish within a few minutes (Apple didn’t say how many) unless you adjust your settings.

“You don’t want to have to clean these up. Audio and video messages can take up space,” said Greg Joswiak, head of iOS product marketing. “So they’re set to self-destruct unless you choose to keep them.”

Sure, group messaging threads among friends can be fun. But sometimes all the back-and-forth chatter gets out of hand.

This feature lets you mute a thread for a while while reserving the option to rejoin the conversation later.

“If you’ve ever been on one of those noisy threads that just keeps buzzing in your pocket … you can choose when to leave,” said Apple Senior Vice President Craig Federighi, to applause from the audience.

CNNMoney: Nice job, Apple. But I’m not coming back

If you’re in a hurry, responding to a message on an iPhone can be a little cumbersome: You have to punch in your passcode and then hit the Messages icon just to get started.

With iOS 8, users can listen and respond to audio messages without leaving the lock screen — just by holding the phone to their ear. The phone detects when it’s next to your face, plays the message and lets you record a brief response. Lower the phone, and the message is sent automatically.

“It’s super easy,” said Joswiak. “You can send a message … just by raising it (the phone) to your ear.”

This feature seems convenient but potentially glitchy if users send accidental messages just by speaking near their phone. There was no word from Apple on how to avoid this potential problem.

If your contacts choose to share them, their locations will pop up in group-messaging threads.

For the first time, users will be able to add or delete someone in the middle of a group-messaging thread.

And message attachments — images and videos, mostly — will be collected in one place so you don’t have to scroll back through longstanding threads to find them.

Men in uniform kill over 100 people in Borno

Yoruba Leaders Are Not Afraid Of Arrest – Fani Kayode…

Harry and Megan To Lose HRH Titles and Royal Funds

Amotekun: Yoruba Has Taken Her Place

Secondus: Supreme Court Under Pressure From Presidency To…

Why We Chose To Restore Peace In Edo – APC Factional…