FORMER Chairman, the House of Representatives  Ad hoc Committee on Fuel Subsidy Regime, Farouk Lawan and its ex-Secretary, Boniface Emenalo, were, on Wednesday, re-arraigned before an Abuja High Court in Gudu, Abuja. 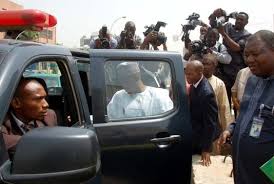 They were arraigned on a seven-count charge bordering on receipt of bribe and abuse of office in relation to the allegation that they received $620,000 as bribe from the Chairman,  Zenon Oil and Gas, Mr Femi Otedola, to exclude the names of Otedola’s companies, Zenon Petroleum and Gas and Synopsis Enterprises Limited,  from the list of companies found to have allegedly defrauded the Federal Government of billions of naira.

They were earlier arraigned on the same charge before Justice Mudashiru Oniyangi (formerly of an Abuja High Court, Maitama) before his elevation to the Court of Appeal some months ago.

The matter was transferred to Justice Adebukola Banjoko following Oniyangi’s elevation to the appellate court.

When the case was called, lead prosecution lawyer,  Chief Adegboyega Awomolo (SAN), told the court that the business of the day was for the accused to plead to the charge afresh.

When asked by the judge if there was any application pending at the Court of Appeal in relation to the case, he said no; a position the lead defence lawyer, O. Jolaawo also confirmed.

Jonathan Dares Lamido To Prove His Involvement In Malabu Deal

Upon listening to the charge, read to them by an official of the court, Lawan and Emenalo pleaded not guilty.

Jolaawo later applied to the court to allow the accused continue to enjoy the bail earlier granted them by the former trial judge.

The prosecution lawyer did not object to the application that the accused persons be allowed to remain on the earlier bail.

The judge, however, insisted on sighting the three men who stood surety for the accused before the earlier bail was granted to know if they were willing to remain sureties.

The case was stood down on that note to allow the sureties, who were not in court, to physically appear in court.

About an hour later, the proceedings resumed following the arrival of the three sureties in court. Justice Banjoko asked them if they were willing to remain sureties for the accused, to which they chorused yes!

Ruling, the judge ordered Lawan and Emenalo to remain on the earlier bail granted by Justice Oniyangi and adjourned till July 7 for further hearing.

What Africa Must Do To Mitigate the Damaging Effects of…

5G, God’s Generals And The Hordes Of Mordor

Killers Of Fasoranti’s Daughter Have Been Arrested, Says…